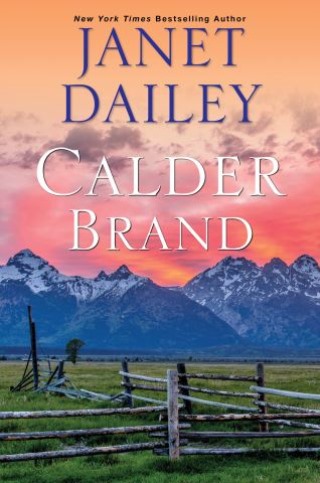 Return to the roots of romance legend Janet Dailey’s most beloved family—the Calders—in this first book in a brand new series set on the beautiful, unforgiving American West, where the only thing more vital than hard work is the love of an unforgettable woman.

The Calder family patriarch is known throughout Montana as a formidable adversary—a force no one in his right mind would cross. But sometimes love can make a man do crazy things . . .

Ambition drove Joe Dollarhide across the parched plains from Fort Sam Houston to Dodge City.  One day, he was determined to have a spread every bit as vast and impressive as his employers’. But when a wild stampede separates him from the cattle drive, it is survival that keeps him going when most would have given up.  Survival and a burning need to settle the score with Benteen Calder, the cattle boss he used to worship, the man who’d left him for dead…

Hope buoyed Sarah Foxworth when she had just five dollars to her name, traveling the dusty rails where Joe first rescued her from a violent attack, then won her heart as a cowboy in need of redemption.  With dreams of becoming a doctor herself one day, she uses all her wits to save her uncle’s medical practice and his reputation. But it’s her own reputation that suffers when she gives birth to an illegitimate baby.

Years later, when Sarah walks into Joe’s world once more, he’s shaken to the core.  Her dreams of becoming a doctor are dashed; her only hope is to find a better life for herself and her son—a child there’s no denying is his own. Now a prosperous rancher, Joe yearns to finally make a home with Sarah and their boy. Only Joe’s own road to riches has been strewn with obstacles, some looming even larger than the demons he still struggles against. But life has also shown Joe that nothing worth having ever comes easy. And that Sarah is a woman worth fighting for…

Janet Dailey: JANET DAILEY’s first book was published in 1976. Since then she has written more than 100 novels and become one of the top-selling female authors in the world, with 325 million copies of her books sold in nineteen languages in ninety-eight countries. She is known for her strong, decisive characters, her extraordinary ability to recreate a time and a place, and her unerring courage to confront important, controversial issues in her stories. To learn more about Janet Dailey and her novels, please visit www.JanetDailey.com or find her on Facebook at Facebook.com/JanetDaileyAuthor.